Throughout the world, zoos are traditionally known as places where animals can be protected and studied. Not all of them provide an abundance of comfort for their animals.

Some dont even offer protection.

The Fuzhou Zoo in Fujian, China, has been criticized for letting visitors throw heavy objects at animals.

A group of visitors lobbing bricks at the kangaroos were hoping to see them hop around, but seriously hurt the animals instead. According to One Green Planet, a female kangaroo suffered severe internal injuries in the incident.

12-year-old kangaroo at zoo in eastern China died after being stoned by visitors hoping to make it hop https://t.co/HyrP46HQij pic.twitter.com/TSp8PSuuek

Video of the kangaroo, seriously injured and lying in its cage, were televised by several Chinese stations, as were images of the animal connected to an intravenous drip, the Washington Post reports.

In days, the kangaroo was dead.

Pics of the bricks that visitors hurled at kangaroos at the zoo in Fujian, killing one and injuring another. Zoo staff say visitors often throw objects at animals despite it being ‘prohibited’. pic.twitter.com/KwFCIcfRQ9

And only a few weeks after that, it happened again.

“Some adults see the kangaroos sleeping and then pick up rocks to throw at them,” a zookeeper told the Haixia Metropolis News. 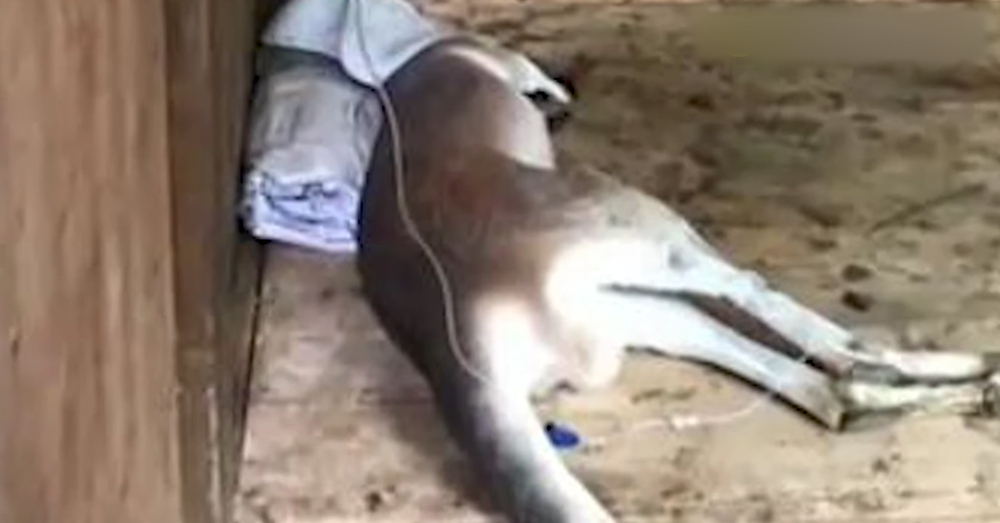 Source: YouTube/TomoNews US
A kangaroo at the Fuzhou Zoo was fed fluids intravenously, until it died days after being hit with a brick.

It is against the zoo’s policy to allow objects to be thrown at the animals, but it continues to happen. Rather than install security guards, the zoo intends to install security cameras, as well as make a taxidermied display out of the killed kangaroo.

“We can only try to persuade people using common sense and referring to animal welfare laws in Western countries,” animal welfare advocate Tong Yanfang told the South China Morning Post last year. “For children and many adults who lack judgment, a wrong perception has been built [in China] that animals are there for the entertainment of humans.

“When they see animals perform in a zoo, they won’t consider how the animals acquired those skills,” Tong added.