Hundreds Of Aquariums And Zoos Are Mistreating Animals, According To Study

World Animal Protection (WAP) has released a report about many ‘gold standard’ zoos that are subjecting animals to ‘cruel and demeaning performances and activities’. Many of these zoos are associated with the World Association of Zoos and Aquariums (WAZA).

WAP is now calling on WAZA to correct the situation. WAZA is a worldwide organization that is over many zoos and aquariums. They want the members of that organization to be held to a higher standard when it comes to the care of animals. 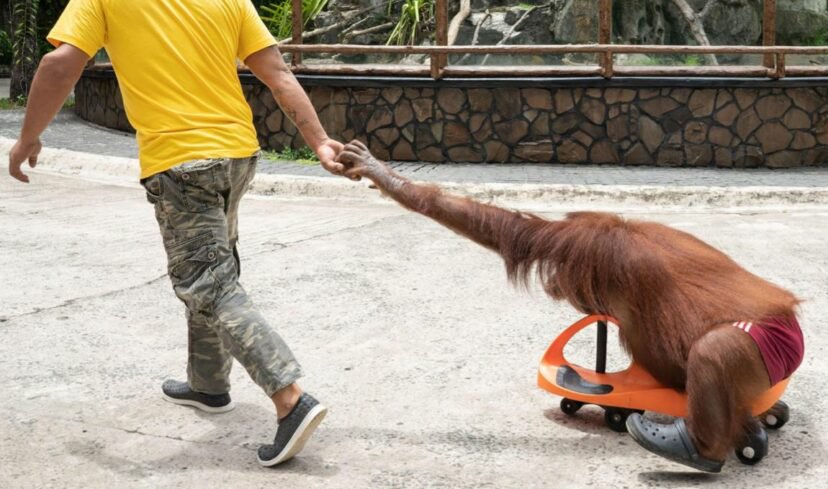 It seems as if many aquariums and zoos are not meeting the WAZA guidelines according to WAP. On-site field research was conducted and it was determined that many of the practices were causing ‘great physical and mental distress to animals’. There were reports from WAP about instances where those zoos were also mistreating animals.

As an example of animal mistreatment, some zoos were forcing lions and tigers to perform on stage while loud music was playing. They also made primates dress-up in costumes so people could have their pictures taken with them.

It seems as if 75% of the 1,241 WAZA members, both direct and indirect, have some form of animal-visitor interaction. Interaction between animals and humans can be harmful to the mental well-being of an animal and can even harm them physically. In many cases, unethical training techniques were also involved.

“To make wild animals interact with, and perform for, visitors, harsh training methods are frequently used that inflict appalling suffering.

Depending on the species, and the type of attraction, these methods can involve premature separation of baby animals from their mothers, starvation, physical restraint, pain, and fear.”

Help stop animal abuse among members of the World Association of Zoos and Aquariums (WAZA) by sending one simple email: https://t.co/BiloGjSVV6 pic.twitter.com/4lmmR4PKZf

Zoos and aquariums are singled out as having seriously concerning animal welfare practices. This includes the Cango Wildlife Ranch in South Africa and Canada’s African Lion Safari.

National Geographic reports that Neil D’Cruze, the global wildlife advisor for WAP states that indirect and direct members were included in the report. They were included because of the need for WAZA to set the standards of ethics and to establish an animal welfare policy for all aquariums and zoos under their umbrella.

A policy such as this does not exist. WAZA doesn’t require members to become accredited, although the US-based Association of Zoos and Aquariums (AZA) does.

National Geographic went on to say that WAZA relies on accrediting member associations to ensure that the animal welfare standards are enforced in those facilities.

An organization has to submit an application with two supporting letters of support from other WAZA members before they obtain membership. There is also a fee involved.