This is a guest post from Tompkins Conservation. To learn more about how you can support their program, click here!

At first glance, one might question the Vizcacha’s heritage – are these mammals part of the Leporidae family (rabbit) or the Chinchillidae family (Chinchilla)? If you guessed the latter, you are correct. With their large ears, powerful hind legs, and small front paws, Vizcachas do share a striking resemblance to the rabbit family. However, their long bushy tail is a distinguishing trait unique to the Chinchillidae family. This tail not only serves as a species indicator, but can also tell us if the animal is feeling anxious or relaxed: The tail is extended when the rodent is distressed and curled when at ease.


The Chinchillidae family resides in areas throughout southern and western South America. The members include the Mountain Vizcacha (Lagidium viscacia), Plains Vizcacha (Lagostomus maximus), Northern Vizcacha (Lagidium peruanum), Austral or Wolffsohn’s Viszacha (Lagidium wolffsohni) and the familiar Chinchilla (Chinchilla lanigera). However, the Austral or Wolffsohn’s Vizcacha is the only member that calls the future Patagonia National Park home, where they live among rocky outcroppings and boulders. It is quite unusual for a rodent to stray from underground burrows, but the Vizcacha has learned to transcend its inferior digging abilities and take advantage of its expert climbing skills. The Vizcacha can jump from rock to rock with such ease and speed, it’s hard for the eye to follow.

Austral Vizcachas live in colonies that range from a few individuals to hundreds. To keep up with the colony chatter, they have acquired an impressive repertoire of vocalizations that are used in social interactions. Vizcachas are small mammals, but these vocalizations resonate with plenty of strength; it’s no wonder they are known for their gregarious behavior.


Vizcachas have a short gestation period that only lasts about four to five months. At this time, the mother gives birth to one fully developed offspring. Because the newborns are developed, the young are weaned at only two months. However, at two months Vizcachas are still very small and vulnerable, which makes colony living a necessity.

With a body length of 1 to 2 feet and an average weight of 3.5 lbs, the Vizcachas are relatively large rodents, yet small in comparison to their carnivorous neighbors – the Puma and the Culpeo Fox. These two are fierce predators, but the Vizcacha has its own advantages: dexterity, speed, loud warning calls, and a home immersed in boulders and rocks (a less than ideal hunting ground). Because of these advantages, the Austral Vizcacha doesn’t often suffer from competition or predation induced population decline. The rodent’s main threat is us. Humans put pressure on Vizcacha populations either by hunting or habitat loss. They are often illegally hunted for their meat and fur – their pelts are considered a luxury to some and are regularly exported out from Chile and Argentina. We’re lucky to have a flourishing population of the Austral Vizcacha in the future Patagonia National Park. Here, the animals can live in their natural habitat, existing only by the succession of the region’s ecological cycle.

Thanks to Tompkins Conservation & Parque Patagonia for the dossier on this unique creature. Read on to see how you can help their incredible conservation work in Patagonia!

Want to Protect This Adorable Critter? 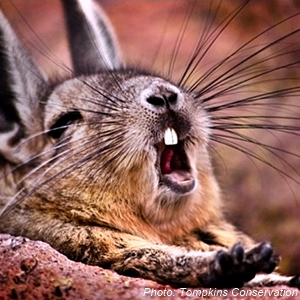 They’re super-cute. They’re also super-wild, and need pristine habitat to thrive. Cuddle your cat, dote on your dog, and envision the viscacha with their bushy tails and incredible whiskers scampering wild across the landscape of a protected Patagonia. You can make it happen!