It seems as if the animals are still busy reclaiming the planet now that we have gone into isolation due to the coronavirus. This includes a huge flock of sheep that moved through the town of Samsun, a coastal city on the Black Sea of Turkey’s northern border.

Ragip Soylu is a reporter for Middle East Eye, who posted the video on twitter. It shows the farm animals moving through the empty streets with some of them even stopping to rest along the way.

Animals around the world seem to be getting bolder as people have left them alone while isolating due to the coronavirus. 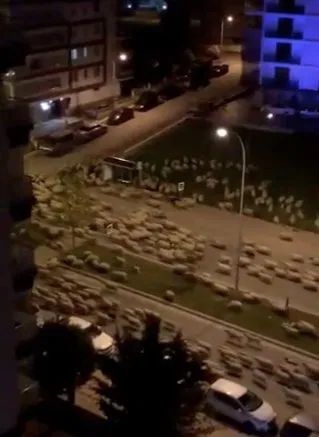 Sea Eagles are seen in the English skies, which is amazing considering that some 240 years ago, they were almost extinct.

Hedgehogs are also coming out, and they are typically very careful about being seen. According to one wildlife expert, they have been indulging in some “very noisy” lovemaking activities.

In Turkey, an additional 61 people died on Sunday due to COVID-19, bringing the total to 3397.

Aside from Western Europe, the United States and Russia, Turkey has the highest number of cases, standing at just over 126,000.

Schools in Turkey are still on lockdown and will remain that way at least until the end of May. The shutdown occurred on March 12, one day after confirmation of the first COVID-19 infection.

Ziya Selcuk is the education minister who said remote schooling using the Internet and television would remain in effect until May 31.

A tracker scheme is planned for Brits who are proven not to have the virus and want to be allowed into the country.

A “normalization phase” is hoped to be implemented by the Turkish government in the coming weeks, according to Mehmet Nuri Esroy, the culture and tourism minister.