More and more we’ve been seeing videos and pictures of just how much we impact nature and our impact on the specific places that animals call their homes.

Video after video, picture after picture, and article after article showing us the trash left behind in a once beautiful place or an animal struggling because we didn’t properly dispose of our trash.

Then, because of this, an innocent animal just so happened to eat it or accidentally entangle itself in it. However, it’s not just trash that has animals getting stuck, but even nets, too that aren’t properly taken care of either.

This is what one turtle had to find out the hard way just the other week. 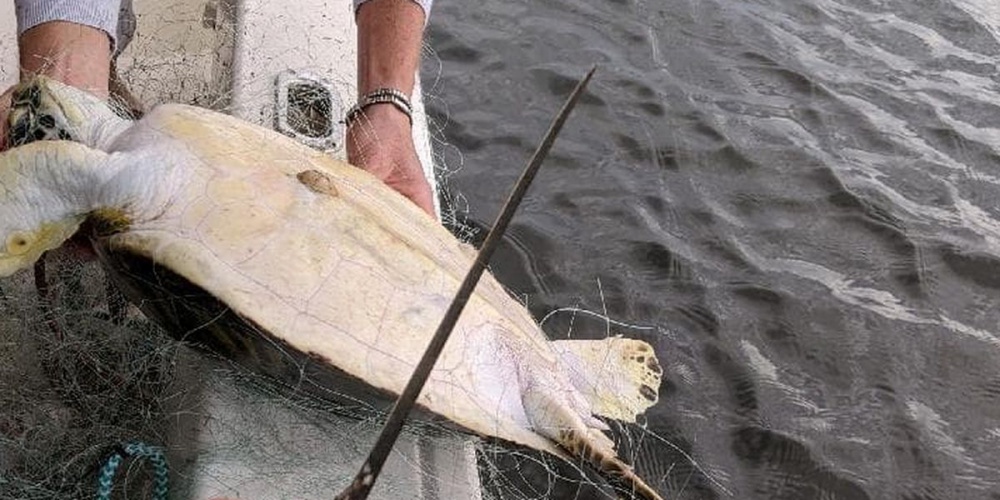 When one captain was on a sunset cruise with his crew he noticed something in the water that didn’t look right and decided to stop to inspect it.

Charter Captain, Jeff Williamson, in Brunswick County was on his usual sunset cruise the other week when he noticed something in the water that looked awfully out of place. So, he made his crew pull over for a moment to investigate the water.

He discovered a cluster of gill net floats with a sea turtle entangled in the net.

He began to pull the gill nets onto his boat and that’s when he saw that a sea turtle had gotten trapped within the net.

Captain Williamson explained to WECT News 6 that, usually, these nets are stretched out. What caught his eye about these nets was that the floats were all bunched up together, so he knew something was wrong.

“Typically when you put a gill net out the floats are stretched out. These were all bunched up. I told my crew I said if you guys got a minute, I want to get that out of the water because it doesn’t need to be there,” he said.

He believes that someone must have cut a section of the net and left it behind.
Then it got stuck in some debris and, unfortunately, crossed paths with an innocent sea turtle.

Once he pulled the sea turtle fully out of the water he could see the webbing was tied around his neck.

As Captain Williamson and his crew pulled over to inspect the bunched up gill net and pull it out of the water safely he noticed the belly of a sea turtle. He continues to explain the event to WECT News 6, recalling this moment-

“It had the webbing tied around its neck. We got it in the boat and was able to get the knife in between the netting and the turtle’s neck cut away so we freed the turtle.”

But once freed the Captain noticed the turtle was still in distress.

Once freed, he noticed the sea turtle was still struggling to breathe.
Although he and his crew had quickly freed the turtle they noticed it actually still needed some help breathing. Luckily for this sea turtle, it had stumbled across the right Captain to help him.

Captain Williamson had actually used to work on commercial shrimp boats and had experience in helping turtles catch a breath. He explains,

“When I used to work commercial shrimp boats, we’d always lift up on the shell to help them catch a breath. After I lifted the shell and took some of the pressure of his chest it definitely took a deep breath and then it took two more as I lifted, pretty cool.”

Without Captain Williamson and his crew, this sea turtle might not have lived to swim another day.

Once the sea turtle seemed well enough, he released it gently back into the ocean.
Once they freed the turtle and gave it some assistance breathing they released the turtle safely away from the area where it was stuck in the nets and it swam away.

Unfortunately, only two states on the East Coast fully ban the use of gill nets.
WECT News 6 also reports on the interesting fact that North Carolina is one of the few states that still allows the use of gill nets in a widespread commercial capacity.

Many view these nets as “death traps for anything and everything that gets caught in them” and there have been multiple attempts to ban the use.

Luckily for this sea turtle, Captain Williamson had his eyes on the waters and when he noticed something didn’t look right, he decided to pull over to inspect.

We are so happy this sea turtle got a second chance at life, free from his entanglements.