The slow loris is one of the most adorable primates to ever grace the planet earth, but these animals are in constant danger of being abused and sold by illegal pet traders.

Like many that came before him, Pasar was captured as a baby, put into a box, and brought to be sold at the animal market in Jakarta, Indonesia. Despite being the only venomous primates in the world and capable of causing anaphylactic shock with their bite, slow lorises are…as their name implies…slow. Their lack of speed makes them incredibly easy to capture, and even easier to put up for illegal sale.

Pasar’s canine teeth were filed down by his captors, rendering him completely defenseless in order for him to be more desirable as a pet. This process commonly causes illness, and eventually death, before the animals even have the chance to be sold. 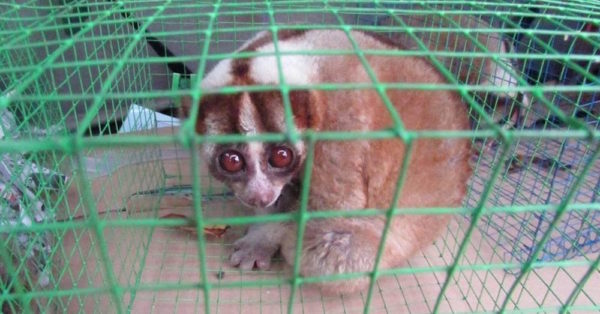 However, this incredible creature got a second chance when the Indonesian police raided the market and confiscated Pasar and four other slow lorises that were being ready to be sold.

The five lorises were brought to the International Animal Rescue center in Ciapus and underwent immediate medical treatment. Many of the adult lorises were dehydrated, their teeth clipped, and mouths bleeding. Pasar and one other baby loris were both extremely traumatized and desperately calling for their mothers.

For the adults it is almost never possible to return them to the wild without their teeth, but the babies always have a chance to return to their homes in the forest; and Pasar is making steady progress towards his release.

Overall, Pasar is in good condition medically and he has been making exceptional progress in his road to recovery. This little loris has come a long way in a short time and is looking like he is right on track to be put back into his forest home.