Nature creates some incredibly ornate creatures. And one, the eagle ray, is a very rare species. Sadly, it’s getting even rarer as conservationists have suggested that in the last 45 years, their numbers have gone down by half!

Given its scarcity, the fact that two were spotted swimming around the Great Barrier Reef in Australia was a pretty big deal – especially since the ray sightings occurred within weeks of one another.

A marine biologist and conservationist, Jacinta Shackleton, first saw the majestic creature on the 25th of May while on a dive in the reef. She captured the moment on camera and later uploaded it to Instagram. 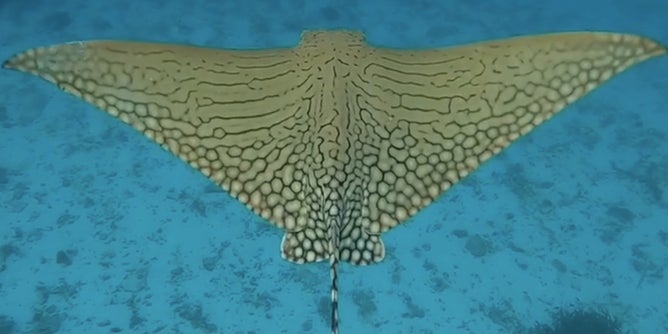 As she shared with Newsweek, the encounter was quite emotional for her, saying, “The island was temporarily closing to guests due to COVID-19 and this was my last morning in the water. So I thought of it as a very special send-off!”

Then, a few weeks later, Shackleton saw the second one. The distinctive ray species is often referred to as the “unicorn of the sea,” because of the skin pattern, but we can’t help but wonder if the rarity factors into the nickname too?

As she said, “I was very determined to get an ID shot of the pattern in its back.”

While the COVID-19 lockdown has caused many creatures to return to their natural habitats, Shackleton doesn’t believe that their return has anything to do with the lockdowns.

She said, “I do not believe it has anything to do with the island being temporarily closed to guests as we don’t have all that many people in the water anyway!”

The eagle ray is beautiful but quite rare, and the populations have been on the decline in recent years. Conservationists aren’t really sure how many are left in the wild, but what they do know is that there aren’t many left. In fact, there isn’t much known about them. However, it is known that they’re not believed to be harmful to humans since they don’t have a stinging barb. But they are quite large, easily reaching lengths of up to 4 meters.