Good news for conservationists. In southern Vietnam, there was an unusual deer that was the size of a cat. It had escaped the efforts of wildlife biologists, leading to many to suspect that it had gone extinct. However, there was local lore that said it still remained alive, yet no one could find one in 30 years – not even a dead specimen.

But the good news is that it’s been spotted! As research reported in Nature Ecology and Evolution, the borderline-apocryphal silver back chevrotain, also known as the Vietnam mouse-deer, has finally been spotted in the wild. However, due to the prevalence of snare hunting in the area – wire traps that are “barbaric” as described by a CNN report – the exact location is being kept very tight-lipped.

However, the sighting is an important one, mostly because a live one has never been spotted. It required a lot of field work, even to figure out where to start looking.

Andrew Tilker, Asian species officer at Global Wildlife Conservation (GWC), said to Popular Mechanics, ” We didn’t have much to go on. The species was described in 1910 from four specimens that were probably confiscated from local hunters, and the locality information for those four specimens was around this city in southern Vietnam called Nha Trang. We had that one piece of information, and then there were no more scientifically validated records until 1990 when a joint Vietnamese-Russian expedition also got a specimen from a different part of Vietnam, from the Gia Lai province.”

So Tilker and An Nguyen – a field biologist affiliated with GWC – along with other collaborators set off to find it. They spoke with several locals in what they believed to be the range of the chevrotain in order to find a good potential spot. Eventually, they settled near Nha Trang.

“After I interviewed local people, we sent the team to the area where they’d seen the species and set up cameras,” Nguyen said.

The cameras were set up in November 2017. After that, the team waited. And the wait was a bit of a long one. That April, when they went to retrieve the cameras, their work paid off. On camera was the silver-back chevrotain, with 72 “events” in all, although it was difficult to determine how many individuals were represented in those events.

Having correctly guessed the area in which to look, the team then set up a more intensive fleet of camera “traps” in the area, which resulted in another 208 events – which was described as one hour period during which one or more was spotted. The markings in these sightings were the same as the previously captured specimen on camera. 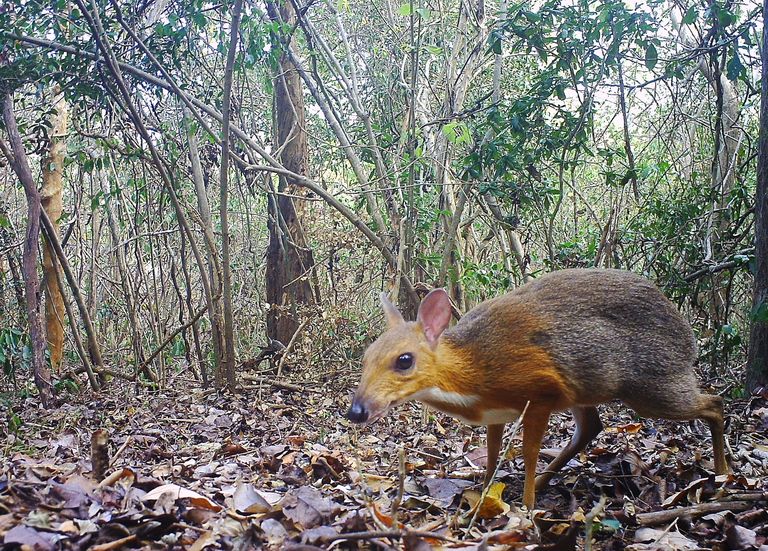 From these images, they were able to glean some information. Firstly, it seems to be that the chevrotain is active during the day. And secondly, it seems that more often than not, they’re pretty solitary.

Despite the sightings, the team still doesn’t know much else about the small deer. For example, the exact population is unknown. This study only offers proof that the species is alive so far in only one area of their historic range. As deforestation has taken place in some of the believed-range since the first specimens were taken in 1910, it’s possible that the deer species only exists in isolated pockets – and this can pose a threat to the entire population of species.

“Ultimately we want to understand how threatened or not the species is, and before we can assess its conservation status we need to know more,” Tilker says.

The chevrotain is not the first animal that has “disappeared” from the scientific world, only to be “refound.” There is a whole group of species called “Lazarus taxon” that was discovered alive after only being known as fossil records.

A perfect example of this is the coelacanth, which was a fish that the western world only ever knew as existing in the fossil records. Then, in 1938, a live specimen was discovered, thus marking a 66 million year gap between when it was believed to have gone extinct and when it was “discovered.”

Southeast Asia also has several species that have come to the attention of the scientific world after decades, due to geographical isolation and other factors. For example, the giant muntjac wasn’t officially written into scientific literature until 1994, just two years after the saola was announced.

So it seems that the natural world would still have some surprises in store for us. However, that by no means suggests that we should be a lack of conservation effort. Yes, nature is incredible for its way of taking care of itself but we must do everything we can to help it along.