In South Africa, what is thought to be a rare black leopard has been caught on video.

Somebody on their way to work on February 24 in the Gauteng Province spotted the animal and took a video. They then shared it with the Wild Heart Wildlife Foundation.

After the foundation posted it on their Facebook page, they talked about the elusive nature of the species.

They said: “It’s the stuff that urban legends and folklore get built around. A phantom, an illusion, a shadow so rare that most people believe they don’t actually exist.”

“Fewer than 35 sightings of wild black leopards have ever been scientifically documented in South Africa in over half a century; clear pictures or video evidence are virtually non-existent – most people having spotted these elusive phantoms crossing a road or disappearing into the bush without the chance to take a picture,” the post continued.

Although these cats are referred to as Black Panthers, they are not completely black. Typically, there are markings within their coats. 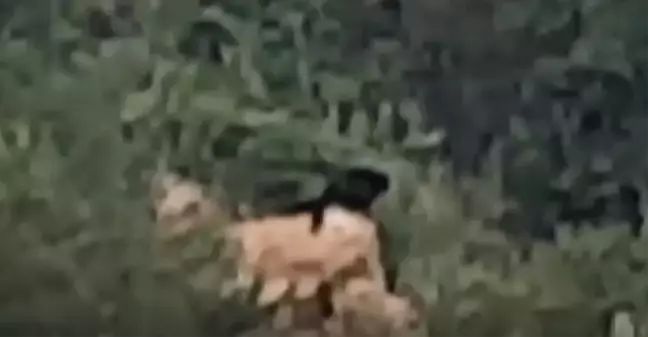 The Wild Heart Wildlife Foundation has been watching for the animal to return since the footage was taken. They would like to collar it and put it in a location that is less heavily populated. Additional information has not been provided to protect the cat.

The cat seems to have disappeared and hasn’t been seen since March 3. The foundation says that it is a good thing.

“After almost a week of monitoring the area with camera traps, there has been no sighting or pictures of the animal.

We are hopeful that if it was indeed a leopard, it has returned to a less populated area in the wild. We did, however, need to attempt to verify it for the sake of the animal’s safety.

No sighting since is a positive outcome.”

A British photographer took some pictures last year of a wild black leopard in the Laikipia Wilderness Camp in the plains of Kenya.

Will Burrard-Lucas took the pictures using a wireless motion sensor and camera trap. The pictures were historic and if you now have a greater interest in these cats, they are worth seeing.