Piranhas have been the subject of a lot of horror stories—some of which have played out on the big screen. It’s easy to see why they make such excellent villains. They’re not exactly cute and cuddly. And, well, there’s that whole thing about them having a ravenous appetite for human flesh.

But how true is that? The answer is, not very. In 1913, former president Theodore Roosevelt travelled to Brazil and later penned his bestseller, Through the Brazilian Wilderness, based upon his travels. In it, he describes the piranhas he saw on his expedition as “the most ferocious fish in the world.”

He went on to detail the ways in which they don’t shy away from attacking and mutilating things larger than themselves, including swimmers, which they have no problem eating alive.

In fact, you get the feeling that they actually get a certain malicious enjoyment out of the activity.

Roosevelt also offered a story about the fish greedily consuming an entire cow. The frenzy in which they devoured the animal was reported to have lasted only minutes, earning piranhas the reputation of being capable of (literally) eating a cow!

In reality, this scenario was somewhat contrived by the locals. Apparently, they actually starved the piranhas in tanks for days prior to Roosevelt’s arrival, then fed them a cow that was already dead.

It shouldn’t come as a big surprise that the hungry fish took the bait, thus cementing their not-so-flattering reputations. 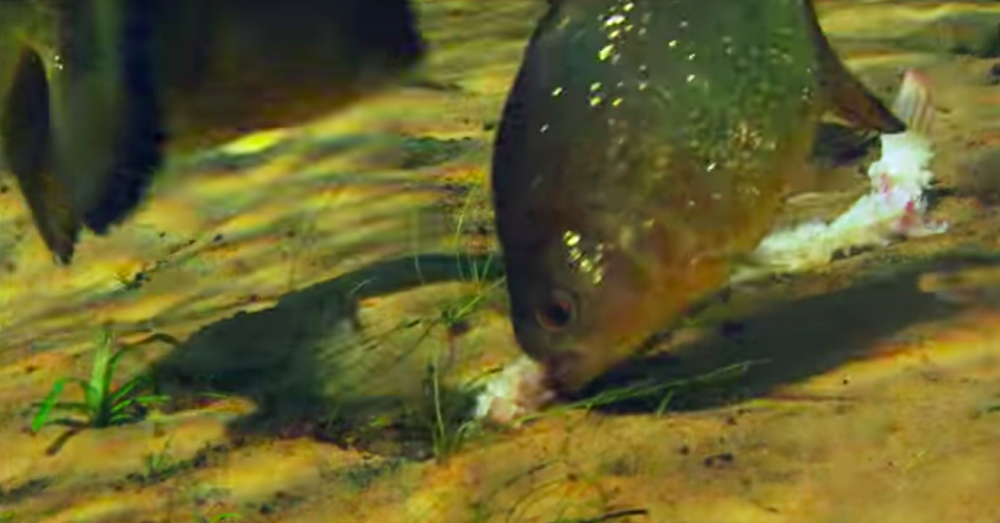 The truth is, piranhas are most guilty of being opportunists. If they come across a human or, say, a cow that is already dead, well, they’ll happily take a few nibbles.

But we’re not completely exonerating them. In the video below, you’ll see a piranha feeding frenzy that will likely leave you less than excited about encountering one in the future! Take a look!