We all grew up with the Muppets as kids. And I think it’s safe to assume that for most of us, our favorite Muppet, or perhaps the one we remember best, is Kermit the Frog. Easily a fan favorite, Kermit is well-known as being the hilarious, lime-colored frog. But now, he’s been spotted in the wild.

In Costa Rica, there is a frog species known as hyalinobatrachium dianae. But this frog is closely related to the glass frog since it has a translucent belly. Of course, the reason it looks like real-life Kermit is the same bright green coloring. Plus, those eyes bare a very similar resemblance.

Fun Fact!: Did you know that many people call me Kermit the Frog because of how similar we look?

On the underside of the frog, the frog’s belly is see-through, giving you a glimpse of the internal organs. It is quite freaky yet very cool – nature truly is incredible.

Dr. Brian Kubicki is the one who first photographed the Kermit lookalike. Dr. Kubicki, along with zoologist Stanley Salazar and Robert Puschendorf, began to then study the amphibian in depth. The Costa Rican Amphibian Research Center discovering scientists then decided to do something incredibly sweet, and named the frog in honor of his mother, Janet Diana Kubicki.

Kermit is a bare-hearted glass frog from Costa Rica #nightsight #tinyfrog #hyalinobatrachiumdianae #kermit This frog is deceptively tiny, it could fit on an eraser head. #glamping is more fun than I realized

The frog hadn’t been previously discovered when scientists first ventured into the area, but that oversight was associated with the frog’s call. According to the The Tico Times, a Costa Rican news media outlet, Dr. Kubicki found that the frog sounds more like an insect rather than an amphibian. As the researchers found, this particular frog’s “advertisement call” was described as being “a single tonal long metallic whistle-like note.”

Only time will tell if the frog shares any other attributes with the famous Muppet that it resembles so closely. 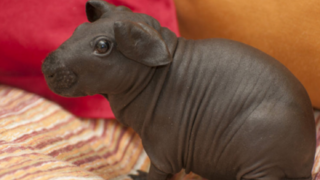