Woman Suffers Severe Eye Pain And Swelling, Finds Out She Has 4 Live Bees Inside Her Eyelid

If you’re afraid of insects, you’ll probably be super thankful you aren’t this woman.

People reports that a young woman from Taiwan (identified only by her last name, He) visited her doctor after experiencing extreme pain in her eye while cleaning up a relative’s grave site.

What her doctor found was unheard of. While she was initially hospitalized with what doctors thought was cellulitis and keratitis, the woman actually had four bees living inside her eyelid.

The bees were apparently feasting on her tear ducts.

Doctors believe that the insects flew into Ms. He’s eye while she was removing weeds from the grave. She assumed it was something more common, like dirt or sand. She tried to flush her eye out using water.

Thankfully, she didn’t rub her eyes, as doctors at Fooyin University Hospital think that could have led to serious damage to the cornea, including possible blindness.

The four sweat bees were removed from her eyelid. Incredibly, all were still alive upon removal. 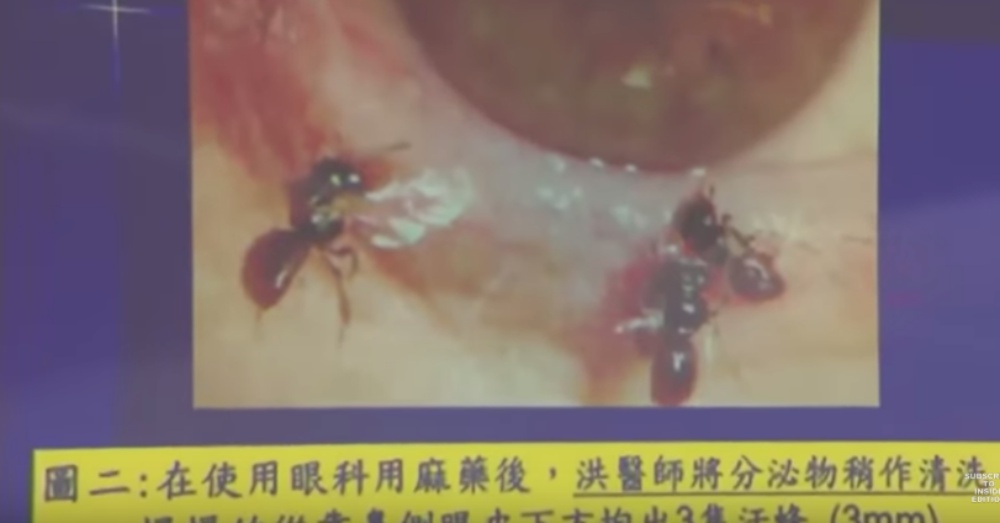 “I saw something that looked like insect legs, so I pulled them out under a microscope slowly, and one at a time without damaging their bodies,” the doctor explained in a press conference, per Business Insider Singapore.

Sweat bees don’t typically attack humans unless pressed directly against their skin, but they are attracted to perspiration and lick it up to supplement their diet.

Thankfully, Ms. He will make a full recovery — and she has been advised by doctors to wear goggles the next time she goes to clean her relative’s grave.

Watch the video to see more.