BREAKING: One Trillion-Ton Iceberg Breaks Away From Antarctic Peninsula

Swansea University has been running the Midas Project for years and has been recording the ice crack on the Larsen C ice shelf since 2011. Scientists noted that the growth of the ice crack grew exponentially within the last three months; the rift saw a 10.5 mile growth between May 25 and May 31, the largest increase since January. In late June, the crack in the ice shelf would regularly grow 6+ miles per day. 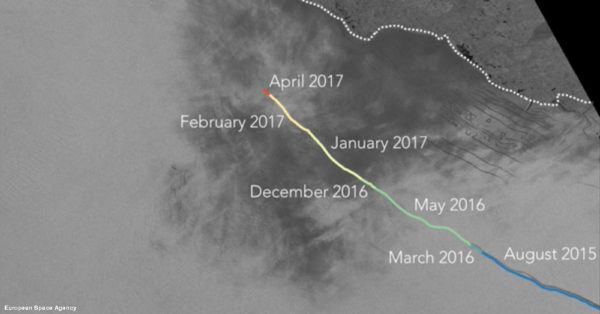 In the end, the rapid growth proved to be too much for the Larsen C ice shelf. Satellite images show that the rift branched multiple times on the Antarctic surface, leading scientists to believe that further ice calving will occur over the next couple of years.

Adrian Luckman of Swansea University, lead researcher of the Midas project, states, “The iceberg is one of the largest recorded and its future progress is difficult to predict. It may remain in one piece but is more likely to break into fragments… Some of the ice may remain in the area for decades, while parts of the iceberg may drift north into warmer waters.” The team will continue their research on the 2,500 square mile iceberg and the fractured Larsen C ice shelf for years to come.

Although the trillion-ton iceberg calved from the ice shelf, it was already floating and will not have any immediate impact on sea level. Like other ice calving events, the Larsen C ice shelf fracture was natural, with no direct evidence of climate change playing a role in this particular event. However, the fracture left the Antarctic peninsula in a vulnerable position.

For more information, watch the video below.