There are many industries that are being affected by the spread of the coronavirus and the travel industry is not immune.

The increased drop in visitors to Thailand has had an unexpected result. The monkey population usually gets fed by the tourists, but according to Viral Press, the monkeys are now not being fed as often.

A video was shared by the outlet on Wednesday that showed hundreds of starving monkeys fighting over a single banana. It was a clear indication of how bad the food shortage has become.

A large path of primates was seen crossing the road before a single monkey was attacked after it was the first to get the banana. They began to fight over the piece of food and then scatter to search for additional food.

”They looked more like wild dogs than monkeys,” one local reportedly told the outlet. “They went crazy for a single piece of food. I’ve never seen them this aggressive. I think the monkeys were very, very hungry. There’s normally a lot of tourists here to feed the monkeys but now there are not as many, because of the coronavirus.” 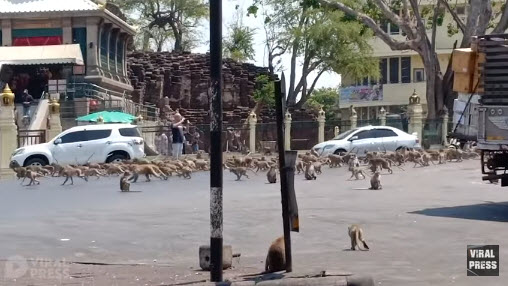 The State Department and Centers For Disease Control have recently stated that a number of countries are not safe to visit. There have also been announcements that US citizens should not get on cruise ships, regardless of where they are going because they are more susceptible to an outbreak of the coronavirus.

President Donald Trump has also announced that he is enacting a travel ban from Europe amid the coronavirus outbreak.

“To keep new cases from entering our shores, we will be suspending all travel from Europe to the United States for the next 30 days,” Trump announced on Wednesday evening.

“These restrictions will be adjusted subject to conditions on the ground. There will be exemptions for Americans who have undergone appropriate screenings,” the president added.

The new rule is set to go in effect on Friday at midnight. Trump also said the restrictions would not apply to the UK or to any legal permanent residents and immediate family members of US citizens.

The World Health Organization has also announced that COVID-19 is officially a pandemic. Some people are even wondering how the virus may affect the family pet.

Anne Kimmerlein, DVM, MPVM, DACVPM, a veterinary epidemiologist for VCA Animal Hospital, spoke to PEOPLE earlier this year and said that “according to the Centers for Disease Control and Prevention (CDC), there is currently no evidence that dogs or cats can be infected with the 2019 novel coronavirus (2019-nCoV).”

Science Magazine also states something similar in a recent report but still encourages anyone who is infected with coronavirus to limit their contact with pets.