Amid the flooding and destruction in Houston during Tropical Storm Harvey, humans and animals alike are scrambling for safety. This is no exception for the invasive fire ants where a number of floating fire ant islands have been spotted in flooded areas in or near Houston.

Known for their painful bites and venom, fire ants appear to have mastered the ultimate survival strategy. Linking their limbs and bodies together with the help from their sticky padded feet, fire ants are able to create large malleable masses that not only acts as a flotation device but as a mean of transportation. 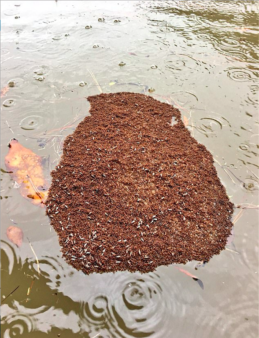 Houston residents are warned to avoid these potentially dangerous floating fire ant masses. They are asked to refer to Texas A&M’s Paul R. Nester’s guidelines if and when they come into contact with a raft of fire ants. Nester informs individuals to wear protective gear including “cuffed gloves, rain gear, and rubber boots help prevent the ants from reaching the skin. If they do, they will bite and sting.” Nester also states that floating fire ant structures can be found indoors after flooding events – maintaining the importance of being alert and careful when cleaning up debris indoors and outdoors.

A 2011 study concluded that fire ants exposed to flooding conditions are more aggressive and 165% more venomous than their dry counterparts. If one should come into contact with a swarm of fire ants, they should immediately brush them off in rapid motions. Submerging and dousing the infested area will not be effective.

This is not the first time fire ant rafts have been observed. During Tropical Storm Cindy earlier this year, Alabama residents were warned to avoid these floating dangers. And again during the 2015 flooding in Greensville County, South Carolina. Depending on the flooding and when the hurricane ends, Houston may see an uprise in the fire ant population – as observed in Alabama and South Carolina.

Watch a fire ant island in action in the video below!