In Victoria, Australia, there is a video of giant spider crabs (Leptomithrax gaimardii) that are gathering by the millions before their annual winter molt.

It isn’t fully understood why these crustaceans gather at the same time on an annual basis when the Australian winter occurs. Winter in Australia runs from June until August.

What is known is that when they do get together, they shed their shells and grow new shells. In the process, they climb all over each other and create a rather interesting spectacle.

The video footage was shared by Museums Victoria, and it first showed up online a few months ago. It shows the crabs gathering in Port Phillip Bay, which is along the central coastline of Southern Victoria.

“Like many crustaceans, Giant Spider Crabs are protected by their hard body shell, rather like a suit of armor. The trouble is that a hard shell doesn’t allow room for growth. Crabs must shed their old skin to get bigger; they can expand their size in the brief window before the new skin hardens,” reads Muesuems Vitoria’s website.

“The process of molting takes up to an hour and all the crabs in an aggregation molt almost simultaneously,” it continues.

The senior curator for Museums Victoria, Dr. Julian Finn, admits that it is “still a bit of a mystery.” That didn’t stop him and others from coming up with some theories after observing this phenomenon for a few years. 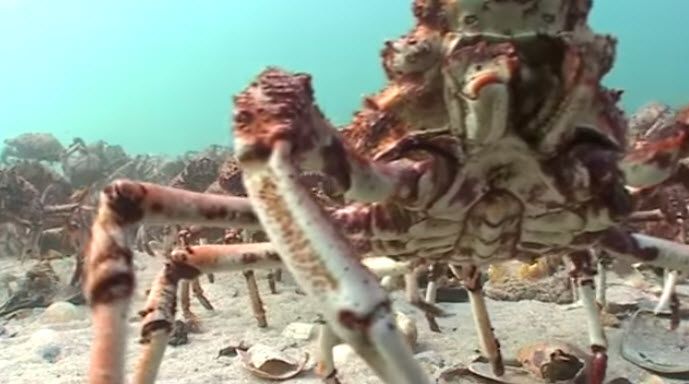 One of the reasons why they may do it is because predators may see them as an easy target during this time. They’ve already shed their shell, so they are vulnerable but there may be power in numbers.

“A soft, freshly-molting crab is irresistible to predators such as rays, seals, and birds. By aggregating in the thousands an individual crab reduces its chance of being eaten, much the same way as mammals in herds find protection in numbers. 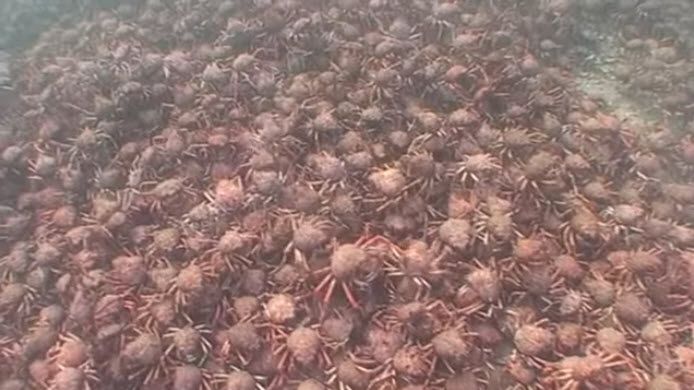 Movement into shallow waters may help the crabs, usually dispersed throughout Port Phillip Bay, aggregate in a single mass and gain refuge from the strong tidal currents that scour the deep channels.

An earlier explanation that the annual aggregations were related to mating has thus far proved unlikely, as following the molting of tens of thousands of crabs, only the odd couple has been observed to mate.

We still don’t know however what happens when they disperse back into deep water.”

Julian believes this sudden influx of tender crab meat is an important part of the Port Phillip Bay food chain.