African animals are facing a crisis as more and more fall victim to snares set by poachers. Poachers set wire traps, called snares, in the forests to indiscriminately catch and kill as many animals as possible. One poacher can set as many as twenty snares a day, and leave them up indefinitely. If these traps are not removed, the beautiful wild animals of Kenya will continue to vanish from the landscape. But thanks to YOUR support, rangers from the Anne K. Taylor Fund (AKTF) have been able to save animals like giraffes, lions, elephants, rhinos, warthogs, and wildebeests from excruciating deaths at the mercy of brutal traps. 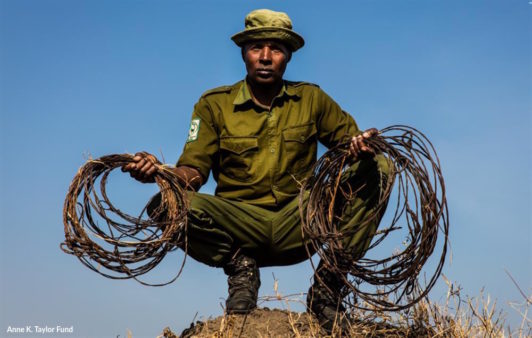 Here’s a story from the field of one very lucky zebra:

One evening, right before sunset, the AKTF anti-poaching team came upon a zebra caught in a wire snare. The snare had caught the zebra’s neck and was strangling it, cutting deep beneath the poor animal’s skin and tissue. The team began removing the trap and treating the animal as darkness fell. Attracted to the smell and sound of an injured animal, hyenas began to arrive. They repeatedly tried to attack the zebra and the team, but the team bravely fended off the wild predators until the zebra was fit to walk. The team then escorted the wounded animal back to a herd of nearby zebras where it would be safe.

This zebra was a lucky one. Other wild animals in similar situations do not have that happy ending. To prevent these gruesome events from happening, we will work tirelessly to remove ALL poaching snares from the African bush. 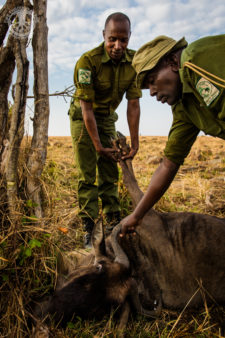 Thanks to your support, this team can remove over 500 snares each year. It is vital that metal snares are discovered and destroyed—one snare can be used over and over to capture hundreds of animals during its lifespan.

There is still a lot of work to be done to keep Africa’s wildlife safe from poachers and the snares they use. With your help, we can continue to save wild animals in Africa from poachers’ snares. You can make the difference between life and death for hundreds of endangered African animals! Click here to donate.

Claire is a California native now living in Arizona with a background in sustainability and community resilience. Whenever possible, she spends her free time hiking (when not melting from the heat), making art out of trash, yoga, and eating tacos.
Proper greatergood_ctg_belowcontent