We humans aren’t the only ones who are being affected by social isolation and the self-distancing during this pandemic. Apparently, animals at the zoo are finding life a tad bit boring at the moment, given that they don’t have the massive audiences that they are used to.

Given that these animals don’t have the interactions that they’ve become accustomed to, the aquarium staff down in Texas decided to get a little creative in order for the animals to be able to see one another.

The Texas State Aquarium has plenty of animal species in their care – both land-based and aquatic. Given that most of these animals are from different worlds, it makes total sense why some dolphins lost their minds when they got to check out a sloth for the first time!

As a spokesperson for the aquarium shared with Bored Panda, “We frequently give the animals a chance to ‘meet’ each other as a form of enrichment, which helps keep them active in body and mind. As some of our most popular animals, it seemed an obvious choice for our sloths and dolphins to get a chance to see each other while we were temporarily closed. We have another sloth, Xena, but on that day, she was more interested in sleeping than meeting the dolphins!”

The sloth was three-year-old Chico, who was moved around to various sections of the zoo. Along the way, Chico got to see some ducks, seahorses, a shark, as well as plenty of fish.

The spokesperson added, “Besides making for some fin-tastic photo ops, these animal interspecies meetups are just one of the many ways we are ‘closed but still caring’ during the COVID-19 situation.” 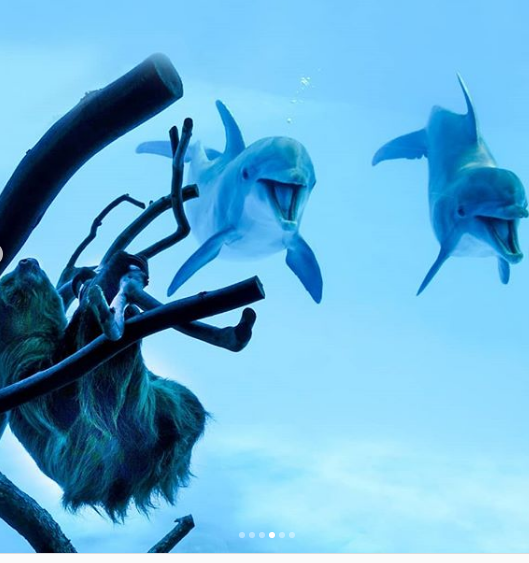 The spokesperson then continued, “Along with enrichment opportunities for our animals, our staff is still busy at work preparing meals for and feeding the animals, maintaining their habitats, and looking after their medical care, to name just a few tasks.”

Since the start of the pandemic when zoos and aquariums were forced to close down, many of them have begun to live-stream their displays for free in order to allow everyone around the world in quarantine to still be able to see cute animals.

There was even another facility that allowed their resident penguins to live out their “Penguins of Madagascar” fantasy and roam free in the halls, looking at the other animals – very similar to Chico the sloth’s free reign around the Texas State Zoo. And so long as these places put live-streams of adorable animals running loose, it’s totally something I can get behind.