Australia is often referred to, jokingly, as a country where every bit of wildlife wants to kill you, and can easily do so. Terrifyingly, Australia is home to numerous deadly species, and more just keep appearing.

Recently, the Western Australian Museum introduced us to the Kimberley Death Adder, a “new” species of death adder, one of the most venomous type of snake out there.

This discovery made us curious about what other snakes out there can boast such potent venom, and here are the findings!

Snakes aren’t naturally vicious or angry creatures, but they are scary simply because accidents happen, and a bite from the wrong snake can lead to disaster. As the saying goes, “let sleeping snakes lie,” especially if you encounter one of these guys!


With the newest addition to the Death Adder family, one of the most dangerous snakes becomes that much more dangerous. Adders are even known to hunt and kill other snakes! Their bites can cause paralysis and death within 6 hours. Before the current antivenom, the fatality rate from bites was around 50%. Considering they can strike within 0.13 of a second, avoiding these patient predators is a pretty good idea.

There are few more identifiable serpentÂ than the rattlesnake. The orchestral buzzing of their tail is something that is found throughout popular culture. Even if you’ve never heard one up close, you know the sound. Hearing it generally mean “watch your step and run,” which is very good advice!

Bites from a rattlesnake are the most dangerous in the United States, especially those from juvenile rattlers. The younger snakes can’t control the amount of venom they release, meaning their bite can be far worse than a more restrained adult. Regardless, a bite requires immediate attention!

People bitten by a rattlesnake can show signs within minutes of being bitten. Symptoms include:

The Black Mamba is one of Africa’s most notorious dangers. A single bite can provide enough venom to kill between 10-20 full-grown adults! The mamba is also highly aggressive and have been known to bite up to 12 times in quick succession. It is also the fastest land snake on Earth, reaching speeds of up to 12 mph. One bite can deliver up to 400 mg of toxin. For perspective, if the snake hits a vein, it only takes 0.25 mg to kill. Without antivenom, black mamba bites are nearly 100% fatal. Symptoms are numerous, and include

The list goes on, which is terrifying in its own right. Bottom line? Don’t get bit by a black mamba, and if you do, get to the hospital IMMEDIATELY.

Cobras are possibly the most recognizable snakes, on par with rattlesnakes. However, despite how television and film might portray them, cobras are not really that venomous. In fact, they pale in comparison to the rest of this list, by a wide margin. There is one exception though. . . The Philippine Cobra. It possesses the most potent venom of any cobra, and can spit that venom up to 3 meters! The venom is a neurotoxin and can shut down both respiratory and cardiac function within 30 minutes. While not a widespread species, this cobra contributes to be a leading cause of death for rice farmers in the Philippines. 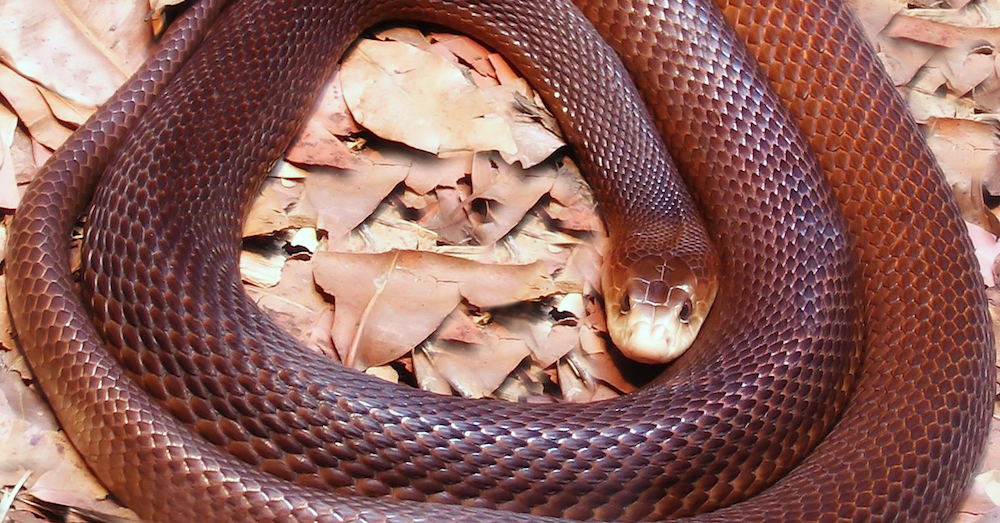 Another native of Australia (maybe there is something to the theory that all Australian fauna is deadly), the Taipan is frighteningly deadly. Before the antivenom was developed, there were no known survivors of a Taipan bite. Their venom acts as a coagulant as well as a neurotoxin. The combination is horrifying to think about, and even with antivenom administered, victims are in for a prolonged stay in the ICU.

The Blue Krait (also known as the Malaysian Krait) is the deadliest of the Krait family. Roughly half of all victims die, even with the administration of antivenom. The venom from the Blue Krait induces muscle paralysis by preventing nerve endings from properly releasing the chemical that sends messages to the next nerve. This is followed by cramps, tremors, spasms, and finally full on paralysis. Luckily, Krait’s are shy and primarily nocturnal, so bites are fairly rare.

Yes, Taipan appears a bit earlier in this list, however the Inland, or Fierce, Taipan happens to be the deadliest snake on the planet. They can release enough venom in one bite to kill 100 humans. Yes, 100. Strangely, there has never been a recorded fatality from a bite. The Fierce Taipan is extremely shy and is seldom seen by humans.