In June of 2015, Clint Blevins witnessed an incredible lightning storm in Daytona Beach, Florida, and captured the footage in stunning slow-motion.

Lightning storms can be awe-inspiring to watch, but they’re extremely difficult to catch on film. They can also be dangerous.

Blevins was at the right place at the right time, and definitely had luck on his side. The lightning bolt that hit the water was very close to him. It’s a relief that the beach was empty because of the storm and that no one was in the water.

Look at this beaut!

When the lightning strikes the water, it’s like something out of a movie.

It’s a good thing Blevins wasn’t dipping his toes in the sand when he recorded this video. When lightning strikes water, the water acts as a conductor, allowing the electricity to shoot into any sealife, boats, or people that are within it nearby.

That’s why it’s crucial to get out of water when you spot lightning, and take shelter in a nearby building or your car. 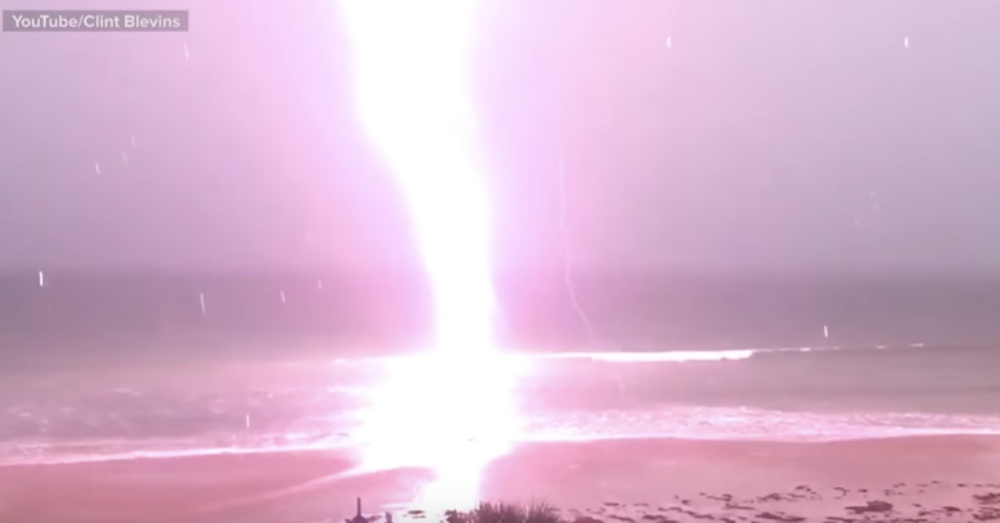 Blevins captured a secondary lightning strike, which is when multiple additional strikes hit after the main one, following the same path. This is why it flares so brilliantly.

If you’re looking to see some epic lightning storms, Florida is the place to be in the U.S. About 1.45 million lightning strikes are seen in the state every year. It’s actually been dubbed the “Lightning Capital” of the U.S.

Central Florida specifically has been dubbed “Lightning Alley,” as lightning storms occur 100 days out of the year there. Central Florida runs from Tampa on the west coast to Titusville on the east coast; Daytona Beach is just north of Titusville.

Getting hit by lightning is incredibly dangerous, as a bolt of lightning can have between 100 million and 1 billion volts and reach temperatures that are five times hotter than sun’s surface. However, the odds of being struck by lightning during one’s lifetime (80 years) in the U.S. are about 1 in 13,000. The odds of being killed or injured by a strike within any one given year is 1 in 240,000.

As the flash fades in Blevins’ footage, we can see what looks like burnt pieces of air left along the path of the strike. How cool is that?

Take a look at the video below to see this amazing slow-motion strike!