Life is getting a whole lot more interesting for captive orangutans at Australia’s Melbourne Zoo, as researchers are creating a program that lets the animals create their own music. The program uses video game technology, and the hope is that it helps the orangutan’s mental health while also showing the public the capabilities of these amazing creatures.

This isn’t the first time the Melbourne Zoo has used video game technology with its orangutans. According to Mic, the zoo uses the 3-D Kinect feature of the XBox One to send colorful lights moving around the orangutan cage. While the primates enjoy simply observing the lights, there are also light games they can play that encourage interaction with zoo patrons. For example, in one game, if an orangutan and a human both place their hands on the same colored light on their own sides of the glass, it glows brighter or explodes.

The music game that researchers are developing uses the orangutans’ movements to create different sound effects. ABC Catalyst reports that a 3-D camera tracks the movements, which determines the sounds that play. The sounds even change depending on the orangutan’s distance from the camera. All the orangutans need to do is walk and move their arms, making this the ideal game for them. 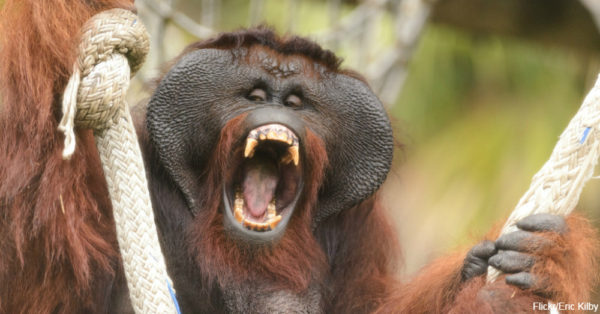 Mashable mentions that researchers believe this game could lead to the orangutans making their own songs. After all, orangutans are closely related to humans, and music is a huge part of human culture. It brings people together and serves as a form of entertainment. It makes sense that it would have similar effects for other primates.

Seeing orangutans create music could also show outside observers how intelligent these creatures really are. What’s most important, though, is that it’s going to serve as a form of entertainment and mental stimulation, improving these captive orangutans’ quality of life.