Researchers from the National Oceanic and Atmospheric Administration spent 3 months exploring the deepest part of the Earth’s oceans. One biologist said a little fish the team saw on the expedition gave some scientists an item to cross off their bucket list. Here’s the remarkable story of the ghost fish’s first sighting.

The ghost fish gets its name from its extremely pale skin. The fish doesn’t have any skin pigments because it lives at ocean depths where sunlight cannot reach. A video of the fish, captured by a submersible exploring a part of Mariana Trench Marine National Monument, represents the first time this species has been seen alive. Every other specimen collected to this point, dating back several decades, was dead in a fisherman’s deep-sea trawling nets.

This tiny fish caused quite a stir among scientists as it was swimming leisurely along a ridge at a depth of 8,200 feet below the surface of the Pacific Ocean. It’s around 4 inches long, it has colorless eyes, and its skin is nearly transparent. The ghost fish is somewhat related to cusk eels, a type of slender fish found living at depths as low as an amazing 27,460 feet. Until now, scientists didn’t know exactly where ghost fish, part of the family known as Aphyonidae, lived in the ocean. Ichthyologists now believe the ghost fish resides in the deepest parts of the oceans as it feeds along the bottom.

Fish biologist Bruce Mundy, one of the researchers with NOAA, called the find “truly remarkable” because many scientists thought they would never see a fish like this in their lifetimes. Some interns working with NOAA think the specimen looks like Falkor, the luck dragon from the movie The Neverending Story. 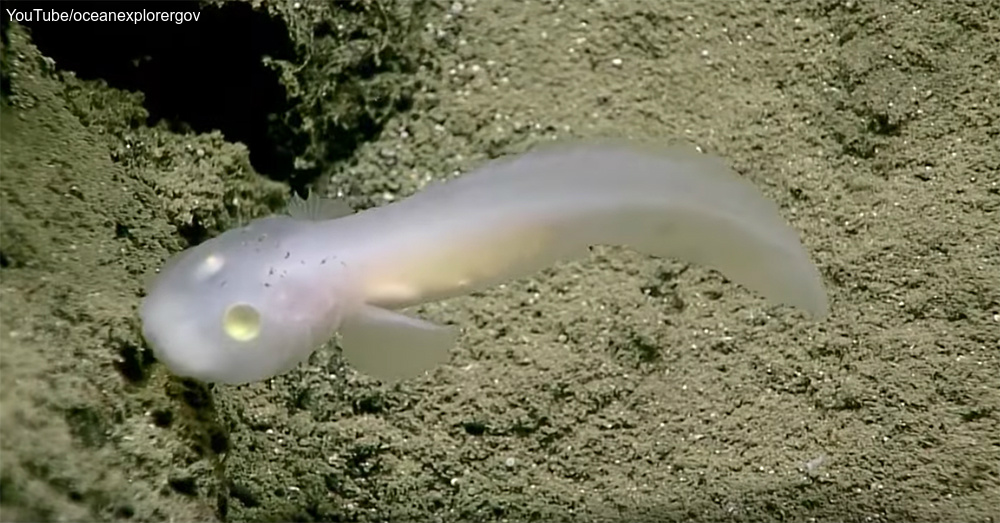 Either way, the fish is a discovery that is part of a concerted effort by the U.S. government to explore the deepest parts of the ocean. Noted explorer and oceanographer Dr. Robert Ballard, the man who led the expedition that discovered the wreck of the HMS Titanic, said that one-half of the territory of the United States lies underwater. Much of that territory has yet to be explored.

The crew that found the ghost fish hopes to bring more discoveries to light in the future. Check out this rare species of deep-sea fish that has an incredible luminescent lure on its head.