Emperor penguins are the largest of penguin species, and the ability to swim the icy waters that surround the Antarctic mainland where they live is integral to their existence. However, one emperor penguin raised in captivity developed an unlikely aversion to water, and the method its owner used to cure her of it is an inspiring example of empathy and innovation.The birth of Charlotte the emperor penguin in 2014 was a unique event, as she was the only female penguin chick hatched in England within the last nine years. Hand-reared by a keeper at Birdland Wildlife Park in Gloucestershire, Charlotte grew strong and healthy, with the exception that she was terrified to go into the water, as this video shows. She would approach the pool with a group of adult penguins but would balk at entering. In the waters of the Antarctic Ocean, emperor penguin chicks learn to swim by imitating their parents, so the only way to coax Charlotte into the pool was for the keeper who had raised her to swim in first. Once he set the example, Charlotte followed, and the problem was solved. 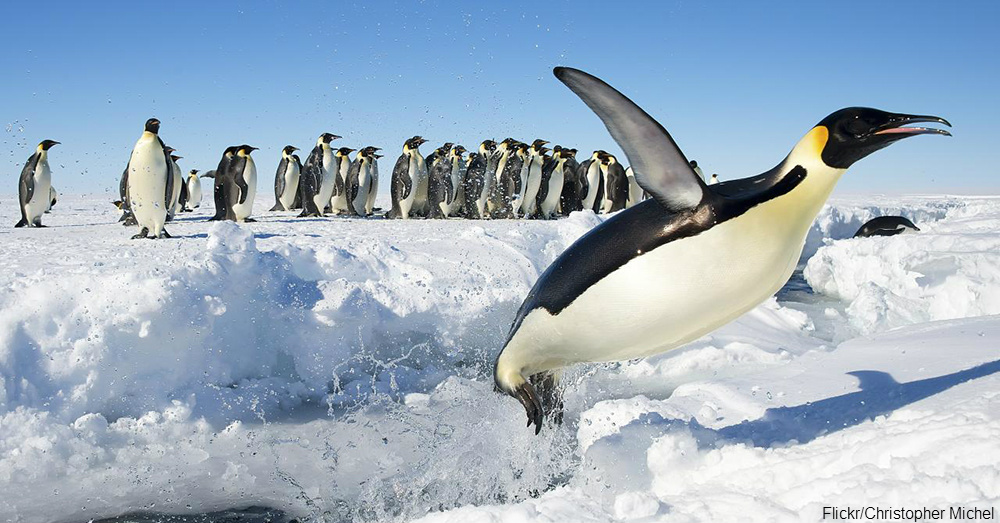 In the wild, emperor penguins spend their lifetimes near the water. They can swim fast, dive deeper than any other penguin species and stay underwater for over 20 minutes at a time by inhaling oxygen beforehand and slowing their heartbeats while submerged. While diving, they hunt fish, cephalopods and crustaceans. Baby penguins feed on regurgitated seafood from their parents until they are led to the ocean and learn to swim and hunt by example.The keepers at Birdland Wildlife Park hope that eventually Charlotte can have chicks of her own that can follow her lead into the water without the slightest qualm. If you enjoyed watching Charlotte overcome her aversion to water, you’ll get a kick out of watching this pair of comical penguins attempt to cross what to them appears to be a watery wasteland.