Just months into the new year, head of NASA’s Goddard Institute for Space Studies Gavin Schmidt confirmed that there was more than a 99% chance that 2016 would end as the hottest year on record, taking the crown from 2015, which had just taken the crown from 2014.

There’s no denying it: climate change is very real; it’s happening this very second, before our eyes, at our fingertips. And, according to a recent report by The Climate Institute, soon enough our warming planet will no longer be able to accommodate the growth and harvest of what has for years been a key global crop: coffee.

The 2.25 billion cups of coffee consumed each day? The main export for over 70 different countries, several of which are considered developing nations? The $19 billion per year industry relied upon by 125 million worldwide for their livelihoods?

Suitable area for coffee plants halved by 2050, the report says. Gone from the wild by 2080, should climate change go undeterred. But how? How is that possible? How can climate change dry the contents of that coffee mug in your hands?

Up the Mountains We May Go

The leaders of coffee production – Costa Rica, Brazil, Colombia, Ethiopia, Guatemala, Kenya, Indonesia – lie on what’s known as “The Bean Belt,” an imaginary stripe running along the equator at latitudes of 25-degrees north and 30-degrees south.

While these aforementioned countries are situated on different continents, what’s common amongst them is precisely what allows coffee to thrive: days are hot and nights are cool at 1,300+ feet above sea level in tropical, mountainous environments. As Tech World points out, this dependable shifting of temperature shocks the natural chemicals within the coffee bean: the organic acids, the aromatic compounds, and the sugars.

Where the problem for the coffee plant begins is that climate change cannot be depended upon. Cool nights become hot nights. Hot days become hotter days. Coffee plants in turn, can’t thrive in soil diluted by frequent torrential downpours, nor can it survive episodes of drought. Nor can it stave off those predators the heat has bred to kill it: fungus and pests.

That’s where the problem for the coffee plant truly lies – those predators. 2012 alone saw the infestation of coffee rust, a fungus that typically doesn’t survive the cold of the mountains, but went on to sweep across Central America, costing some producers in Guatemala up to 85% of their crop. In all, coffee production in Central America was greatly wounded from coffee rust: $500 million lost and 350,000 people out of work.

Equally as frightening is the coffee berry borer, the only animal able to survive solely off of the coffee bean. How it does so: female adult beetles – just a few millimeters long – bore holes into coffee berries and lay eggs; when those eggs hatch, the larvae proceed to feed off of the seed, destroying the bean entirely. According to National Geographic, this pest has led to roughly $300 million lost in Brazil, and, thanks in part to climate change, have spread to other coffee-growing nations along The Bean Belt.

It’s predicted that a shift will take place soon, that coffee farmers – those within developing nations that have minimal access to agricultural innovation, let alone the proper tools to implement said innovation – will chase the cold. They’ll encounter and establish coffee production within protected rainforests as they go up mountains in search for cooler air. And as the world warms, those predators will give chase.

But does it all really have to run coffee farmers off of the mountainside?

The Fate of Coffee Farmers

Let’s return to this statistic: 2.25 billion cups of coffee are consumed worldwide each day. Now, let’s take that statistic and follow its complex root system, all the way back to the source: coffee farmers.

Worldwide, there are 25 million of them that make those 2.25 billion cups of coffee possible, many of which hail, yes, from developing countries, but, more importantly, have never known anything other than coffee. A career change may not currently be possible.

Because that’s what these coffee farmers face.

It goes beyond materials, beyond currency. No, what we’re talking about here is identity, the fact that, unless we step in and help, climate change can, and will, yank from coffee farmers what has not only sustained them for years, but has helped provide a sense of individual and national pride.

But how can we step in? How can we help? We can start by fighting to give coffee farmers something they currently have so little of: options.

How we combat climate change’s threat to coffee today is to innovate, to fund research pivotal to the discovery of new coffee farming techniques, to keep farmers from having to climb and harvest the mountainsides. A fighting chance for coffee farmers worldwide – that’s what agricultural innovation will allow; that’s what we must strive for, what we must request from Kanayo F. Nwanze, President of the International Fund for Agricultural Development.

Find out more about how you can help below. 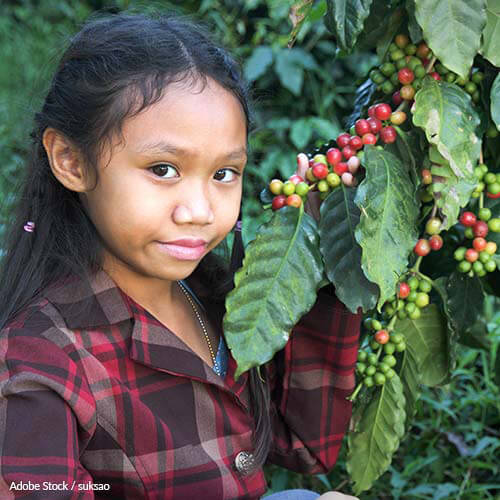 Unless new coffee farming techniques are discovered, climate change will render coffee extinct by 2080. With it will go the livelihood of 25 million coffee farmers.