Giant Hornets Can Devour A Honey Bee Hive In Minutes, And They’re Invading The US

Giant hornets are invading Washington, and they’re killing off the state’s honeybees.

The Washington State Department of Agriculture first reported finding an Asian giant hornet in December, near the northern border.

“Since these hornets are normally dormant in the winter, it’s unusual to find them active this time of year,” Washington State Department of Agriculture public engagement specialist Karla Salp told Capital Press. “It’s probably because the winters are milder here, so they’re surviving better. It seems the Pacific Northwest is their ideal environment.”

Authorities are now warning residents to watch out for the massive bugs, which can grow to the size of a tangerine. 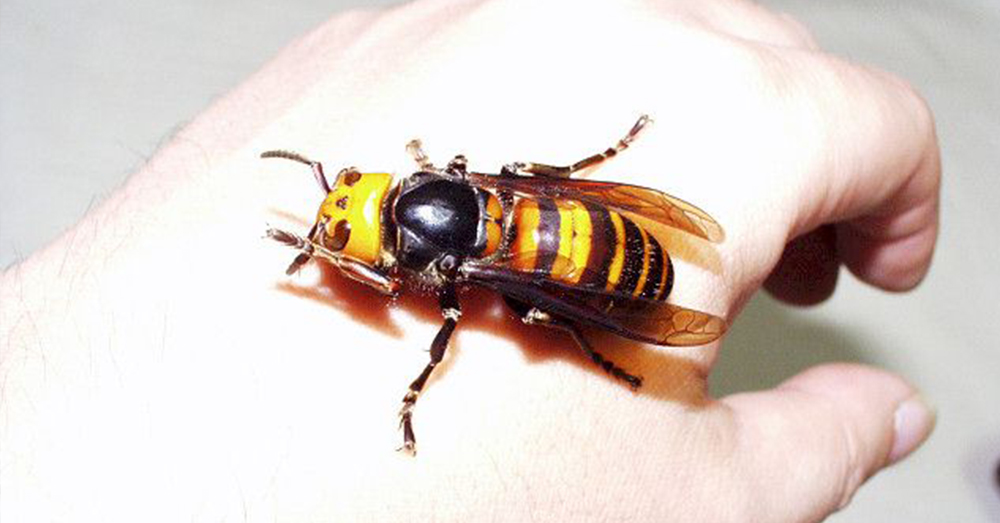 Source: flickr/Justin
The average Asian giant hornet can grow to over 1 and a half inches long, with a 3-inch wingspan.

“Although it is not typically aggressive toward humans, this unwelcome pest can inflict a powerful sting and also represents a threat to honeybees, for which they have a voracious appetite,” the WSDA stated. “Though they are typically not interested in humans, pets or large animals, they can inflict a nasty sting if threatened or their nest is disturbed.”

On average, the giant hornets measure about an inch and a half long with a 3-inch wingspan and a formidable sting, but the greatest danger they pose is to important pollinators. The Asian giant hornets devour and disperse entire hives of honeybees, feed masticated bees to their young, and wreak havoc on crop production.

As the name implies, the Asian giant hornet comes from the rainforests of Southeastern Asia, where they are also called commander wasps, yak-killer hornets or tiger head bees, Capital Press reports. 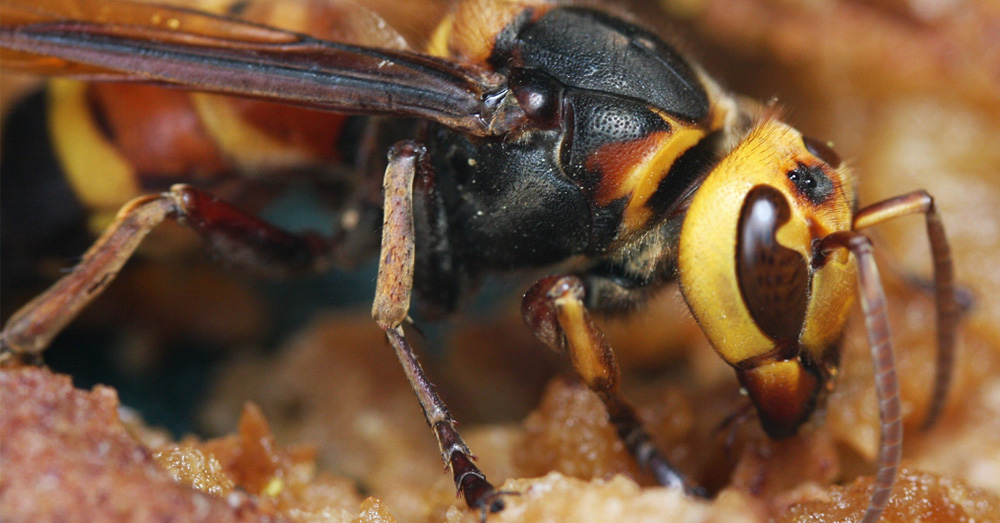 In Europe, though the invasive hornets are rarely seen, variants of the Asian hornet have destroyed nearly a third of the continent’s beehives, while reducing honey production by twice as much.

The threat Asian giant hornets pose to agricultural production cannot be overstated. According to Tim Hiatt, a commercial beekeeper and member of the Washington State Beekeepers Association, speaking with Capital Press, a single hornet is capable of killing 40 bees in 60 seconds. The hornet’s work in Europe has resulted in dramatically reduced harvests. Washington state officials are hoping the same doesn’t happen in the U.S. 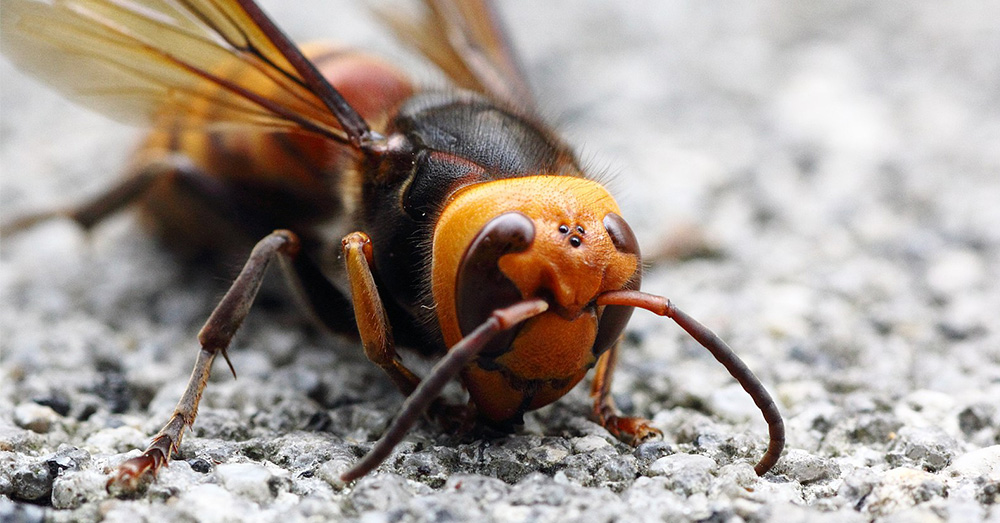 Source: Wikimedia Commons
An Asian giant hornet was discovered in Washington on December 2019.

“No one knows what triggers it, but sometimes they literally go into slaughter phase, decapitating bee after bee and eating their bodies,” Salp said. “It takes 20 hornets to kill an entire hive in one to six hours.”

In Asia, honeybees have developed their own methods of dealing with the giant hornets, swarming around the invader and smothering it until it suffocates. Living for millennia without such threats, honeybees in North America are far less prepared to defend their hives.

“I think there’s a need for panic,” said Laura Lavine, chair of Washington State University’s entomology department. “I’ve heard anecdotes of beekeepers in Asia standing around with badminton rackets, smacking the hornets to the ground and stomping them. I know that sounds totally insane, but that’s what it can come to.”

The Asian giant hornet likely made its way to Washington through western Canada. Canadian authorities issued a pest alert in August 2019 after discovering a colony of Asian giant hornets in British Columbia, Newsweek reports. Weeks later, the hornets were spotted in the Nanaimo area on Vancouver Island. Given the elusive and aggressive nature of these insects, it’s also clear that preventing the hornet’s spread will require assistance from many more pairs of eyes than just beekeepers.

“This is a good citizen-scientist moment,” Levine said. “Everyone can pitch in.” 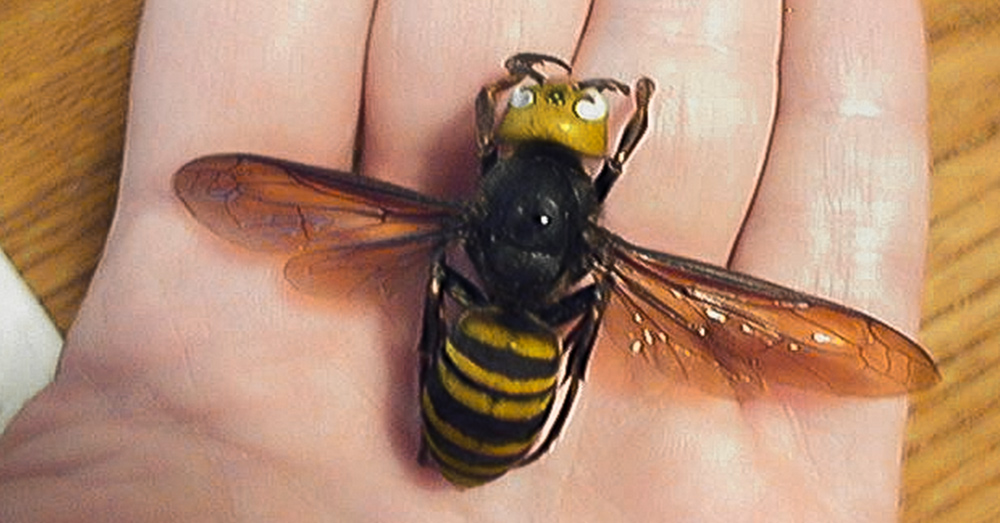 Source: Wikimedia Commons
Asian giant hornet stings are not deadly, but they do hurt.

As Q13 Fox reports, the hornets typically stay clear of humans, but will not hesitate to swarm and sting if their ground nests are stepped on, upturned, or otherwise threatened.

Asian giant hornet stings are painful, but not deadly in most cases. State authorities advise washing hornet stings with soap and water and applying a cold compress to reduce swelling. If symptoms worsen, call your doctor.

Learn more about the giant hornets in the video below.

A Permanent Ban On The Chinese Wildlife Trade May Be Needed To Stop Coronavirus, But It Won’t Be Easy: Click “Next” below!